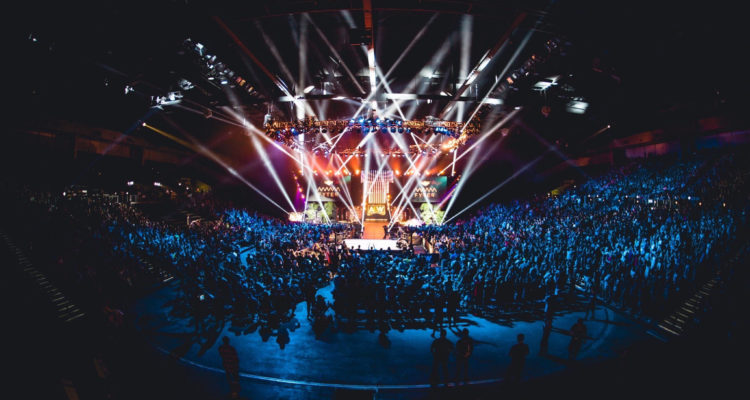 Earlier this year CEO had its second event at the Daytona Beach Ocean Center. The event was a great success; featuring players from all over the world, amazing live wrestling, 24 hour gaming, and many of the fighting game community’s favorite vendors, and celebrity guests.

Since CEO 2016, when we hit capacity at the Wyndham Orlando resort, I(Alex Jebailey) have been on the hunt for an all encompassing venue to meet CEO’s ever growing needs. During my search  I visited over 10 different potential venues in Orlando that could potentially meet our requirements. They included The Wide World of Sports at Disney Word, multiple Universal Orlando Resorts, and even the prohibitively expensive Orange County Convention Center. While all of these were great destinations, the prices for attendee hotel rooms, internet, basic event needs, and other services proved way more than CEO could handle.

This is where I had to think outside the box and be willing to take CEO to neighboring cities. I researched options in Tampa, Daytona Beach, and other major cities in Florida. CEO’s Fighting Game Championships will always belong to the community in Florida first and foremost, so cities in other states were not considered.

From a venue standpoint, The Daytona Beach Ocean Center had everything we needed (and more). The Convention Center staff were incredibly easy to work with, welcoming to our needs, and had everything we could ask for to allow CEO to grow into a city-wide event. Eventually reaching that scale would make moving into one of the huge Orlando Convention Centers a financial possibility. The Ocean Center helped make everything affordable for exhibitors, partners, and CEO’s main-stage show. The variety of hotel choices across Daytona Beach within walking distance of the venue, great catering options, and cheaper than normal convention center food prices also meant the Ocean Center would be affordable for our attendees in an era of rising ticket costs.

Additionally, the Ocean Center had affordable internet not monopolized by a 3rd party. This meant we could host over 10 official streams for fighting game fans world wide. As an added bonus, the Ocean Center Arena was connected to the venue included in the venue price, making it an all in one location  to do more than just host our tournaments. The presence of the Arena eventually led to the NJPW & AEW live wrestling shows as well. These shows fully realized CEO’s theme through collaborations that may not have proved possible had we attempted to host CEO elsewhere. I still think those shows were an incredible achievement for everyone involved, and a great spectacle experience for CEO’s attendees and fans.

Unfortunately, not everyone had the great experience we want CEO attendees to have with the local surrounding area. That is something I took to heart and made sure to regularly convey to everyone I was working with in Daytona. During that time I got caught up in local politics while trying to improve the experience for CEO’s attendees. While some of my involvements proved misguided, it was, and is, my greatest ambition to produce the best CEO experience possible in Daytona Beach.

I believe the CEO experience in 2019 was vastly improved over 2018, but I recognize that some attendees, and some potential attendees viewing from home, continue to be uncomfortable with Daytona as a destination. While 2020 returns home to Orlando, I have seen a lot of the plans going into Daytona’s Beach Side Area for 2021 and onward aimed at resolving these discomforts. New resorts (one of which is scheduled to open right next to the venue near the Hilton, doubling rooms available across the street), Daytona’s annual races moving to August, and a renewed focus on tourist hospitality should all lead to an ever improving local experience for CEO attendees.

Every story I read online, and every attendee post, I relay to the Ocean Center and the city to ensure your experiences are heard. While there are events happening all the time in Daytona, I’ve been told our attendees were the most vocal the city had seen. Your feedback, just like when it’s provided to me about CEO itself, are inspiration for Daytona Beach to build towards being the premium destination CEO believes it can be.

When I discovered that the Daytona Beach Ocean Center was not available during a suitable June 2020 weekend, I felt it created a perfect opportunity for CEO to return home for a year, recharge, and redevelop what the event could truly become in Daytona Beach. Eventually Daytona did become available for our 2020 event, but at that point I was committed to re-exploring CEO’s past and taking the extra year to work with Daytona Beach on their ongoing efforts to redevelop as a peak tourism destination in Florida. Taking the time to try and do things right is a hallmark of CEO, and I’m confident this is the right decision as CEO continues growing into an event capable of affording Orlando Convention Centers in the future.

Please note: We are planning for CEOtaku, CEO Dreamland, and our regional tournaments (like Winterfest) to remain in Orlando.

With all of the above, I wanted to convey what CEO has had to think about over the last few years and be transparent with the fanbase we’ve developed. Continuing to grow into one of the largest fighting game conventions in the world has not been easy, but my staff and I work year round to try and provide an amazing one-of-a-kind experience for our the fighting game community. We hope you join us on our journey as a returning attendee, a new competitor, or a general fan of fighting games in the years to come. For now, the next five years of CEO Gaming are set. We will only continue to improve the experience and keep you in the loop on all things CEO as they happen.

Thank you for ten years of support,
Alex Jebailey